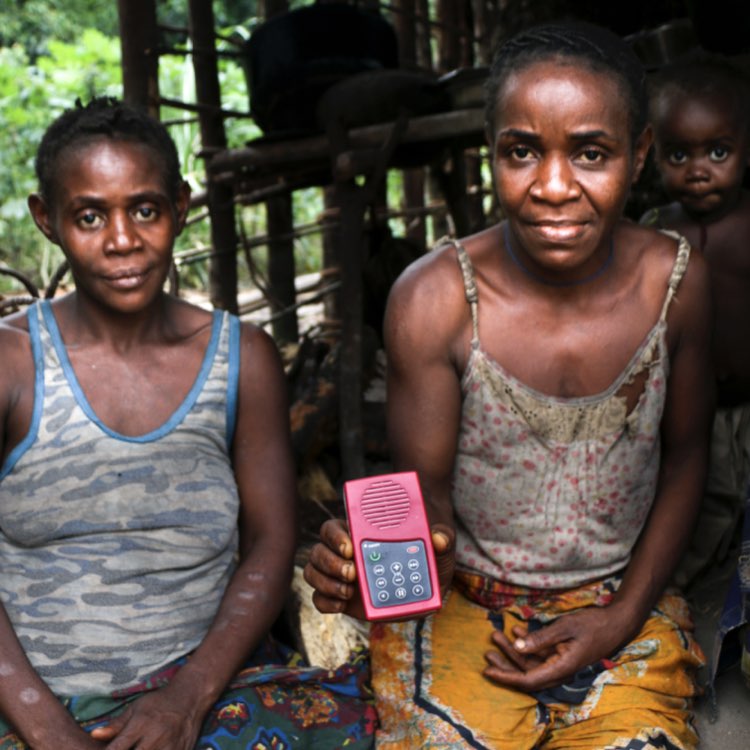 Annweiler, July 25, 2018: Diarrhea kills 2,195 children every day—more than AIDS, malaria, and measles combined. Most of these deaths are entirely preventable using simple, low-cost interventions. The real challenge is to provide this vital health knowledge to illiterate mothers living in remote locations, such as the rainforests of Central Africa. French anthropologists are now using solar MP3 players to spread health awareness songs performed by indigenous musicians.

The Aka are a nomadic pygmy people living as hunter-gatherers in the dense rainforests of Central Africa. They are geographically isolated, illiterate, have no written language and are discriminated in their access to social services. Every year they are losing hundreds of their children due to diarrhea. How can it be made sure that the Aka can acquire vital health knowledge?

The answer is: with songs and solar-powered MP3 players. Music is a key element of the social and spiritual life of the community. It forms an integral part of Aka rituals including ceremonies related to the inauguration of new encampments, hunting and funerals. That's why French anthropologist Romain Duda came up with the idea of inspiring songs that could be used for health sensitization. His effort is part of a project that is lead by the Order of Malta France with the goal to improve the health status of the Aka.

The songs are performed and recorded in the field and distributed together with additional information on solar-powered MP3 players from URIDU (www.uridu.org), a German NGO. „Our goal is to develop technologies that provide health literacy to the illiterate“, explains Marcel Heyne, founder of URIDU. „Our rugged, solar MP3 players are a great tool to reach out to marginalized communities in remote areas.“

One of the songs is called „Musele“. It deals with the prevention of diarrhea and recommends local medicinal plants for treatment. The Aka may have lost countless children due to diarrhea in the past. But changing this fate is now literally in the palm of their hands.